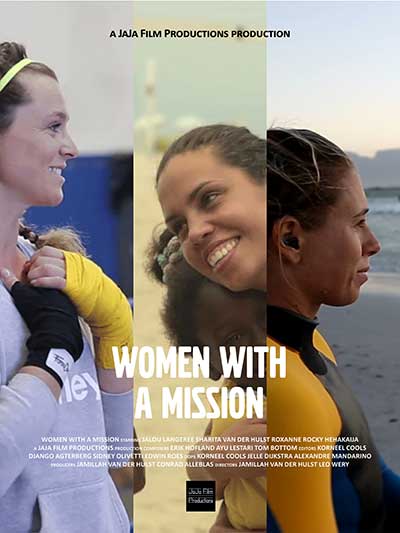 Women with a Mission

Women with a Mission is a series of 3 short documentary films. Each film tells a compelling story about a woman with a mission who, under most challenging circumstances, follows her passion and uses sports for change. The episode Women with a Mission – Jalou sketches the portrait of world champion kitesurfing Jalou Langeree who wants to reach for the highest in kitesurfing and who wants to be an inspiration for girls and women to also take part in extreme sports. It becomes clear that Jalou is on a mission to create equality between men and women in extreme sports. In the episode Women with a Mission – Sharita boxing coach Sharita van der Hulst is followed during a course for boxing coaches that she provides in the South African prison Drakenstein Correctional Centre where heavy sentences are served. The film gives a unique look into the prison where Nelson Mandela, himself boxer, was serving the last 18 months of his captivity and shows what it means to get a second chance. The episode Women with a Mission – Rocky tells the story of street football legend Roxanne ‘Rocky’ Hehakaija as she returns to Rio de Janeiro where she worked in the favelas as a coach of the Favela Street Girls. The Favela Street Girls and others involved in the project talk about Rocky who, with her contribution as a coach, changed the lives of the girls and created new opportunities for them. Official Selection What If – Women in Film Festival 2019. Official Selection Portuguese Surf Film Festival 2018.