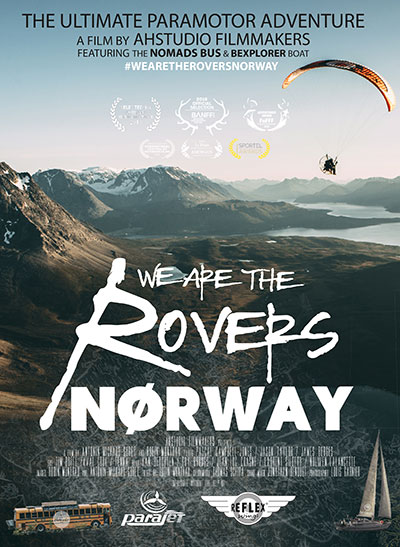 We are the Rovers

Hop on board, we are taking you on a (visual) adventure. The ‘We are the Rovers’ trilogy will take you on a fantastic human paramotoring adventure and make you discover the beauty of the untouched Norwegian sceneries, the urban Korean jungle and the Scottish wilderness! The propellers of the paramotors are taking us in Norway, the latest We are the Rovers adventures. The movie will take you out on land, sea and in the air to make you have a feeling of the greatest of the country. The trip is rythmed by the sound of the propellers, the movement of the waves on the BeXplore Boat and the unfinishing roads in the Nomads Bus. A human adventure where laughs, discoveries and the unexpected make every moment unforgettable. Follow our 3 pilots during 10 days filming in Korean cities diving in the street, touching car, foot draging the harbor and escape in the cloud, above skyscrapers under construction. A breath breaking challenge! Travel high above the Highlands of Scotland, far from the safety of flat lands and predictable landscapes, flying over dark lochs, huge mountains and deep into the beauty of Scotland. Providing a unique perspective on an ancient and beautiful land, you’ll see the best of Scotland from the air and witness the tricks and skills of some of the best pilots in the world. Clip your belt and enjoy the landscape! Finalist – DeepFocus Film Festival 2019. Adventurer Award & Runner Up Int Feature Length Film – FOFF 2018. First Prize – Amorgos Film Festival 2018. Sportel Awards 2018. Icare Coup du Coeur – Les Icares du Cinema 2018. Official Selections 2019: BH Tour Film Festival, Nature Track Film Festival, Irish Adventure Film Festival, International Mountain and Adventure Film Festival, LWFF Official Selections 2018: BANFF, Autrans International Mountain Film Festival, International Festival of Outdoor Films.