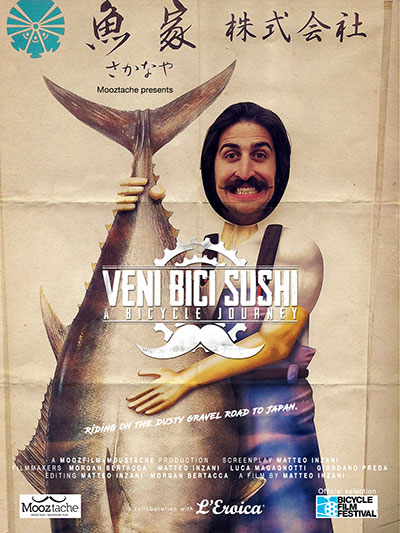 (Also available in 78 mins version) Veni Bici Sushi – A Bicycle Journey. Matteo is 1.95 mt tall. His curly moustache would make a Cossack green with envy and his smile is like the one of a Californian globetrotter. Matteo is an italian filmmaker and a passionate cyclist. He discovers cycling pedaling up and down the hills of Piacenza, his birthplace. In autumn 2013 Matteo goes to Gaiole in Chianti to participate in the 17th Eroica with his 1980’s Raleigh that takes him to the end of the 75km race course amid more than 5.000 competitors, coming from all over the world. The Eroica is mainly known abroad and Matteo discovers it is expanding year by year: in 2014 the first edition of Eroica Britannia take place in England, in the Peak District National Park, the second mostly visited national park after the Fujiama where, needless to say, the second edition of Eroica Japan will take place in the same year. A dream comes true: Matteo takes a tour all over every single Eroica race trough Tuscany, Japan and England. Training along the amazing Como Lake, having a sushi breakfast in the Tokyo’s most famous fish market, receiving hospitality in a traditional Japanese house, pedaling around the sacred Mount Fuji, getting lost among the green english hills. Tasting beer, red wine and sake; eating pudding, yakiniku, salami and ribollita, Matteo brings us into a great journey on two wheels, consuming tires on dusty roads, crossing different cultures, eccentric characters from all over the world, through exotic ways of cooking and living. An amazing story written and told by a gentle leitmotiv: the rolling of his Raleigh chain. Best Cinematography – Around Film Festival 2019. Official Selections 2019: Mountain & Adventure Film Festival, New York Lift-Off Festival.