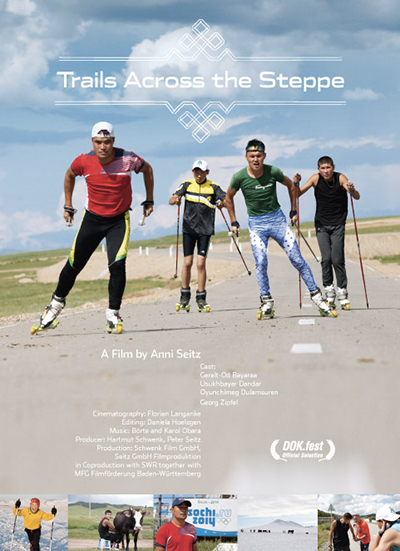 Trails Across the Steppe

This movie is about the dreams and opportunities of young Mongolian cross-country skiing athletes, about their struggles to overcome all obstacles on their way to a participation in the world-wide society of professional sports. Three young Mongolians dream of an international career as cross-country skiers. Their ultimate goal is to participate in the Olympic Games. For Gerelt-Od (27 years) this dream seems within reach but it will be either him or his best friend. 11-year-old Oyunchimeg, the little girl with the black braids and large smile, still lives with her mother in a traditional yurt – and is her coach’s biggest hope. Usukhbayar (17 years), who comes from a family of ranchers, already competed at the Youth Olympic Games in Austria but with the difficult future prospects in Mongolia he is unsure about committing himself to a career as a professional athlete. We learn more about them and their families, about the role that aspects like raising animals, nomadic tradition, and Buddhist faith play in their lives. With breath-taking scenery and heartwarming people, the film shows where the Olympic dream takes its beginning. Compared to the high-tech world of international sports, Mongolia lacks expertise, material, and training opportunities. Georg Zipfel, former Olympic athlete and German national coach, is trying to tackle these problems. On behalf of the International Ski Federation and fueled by great personal enthusiasm, he has taken up the cause of Mongolian ski sports. Official Selections 2014: VIMFF, Banff Mountain Filmfestival, International Documentary Film Festival Munich & Filmfestival Kitzbühel.