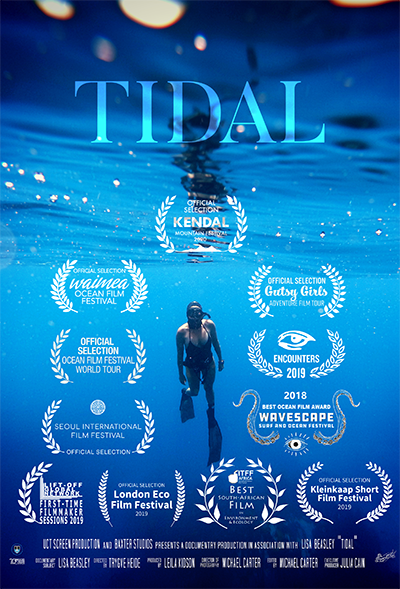 The documentary follows Lisa Beasley’s journey after a horrific BASE jumping accident encourages her to return to the ocean. Lisa’s journey begins with a childhood love of water and sea life. This obsession continues until it is eclipsed by her growing infatuation with skydiving and then BASE jumping. As her jump numbers increase, so too do the risks, until one jump changes everything. After opening her chute too early, Lisa has to endure the horror of being swung into the mountain face repeatedly on her long way down to the ground. Lucky to have survived she must now face an immense recovery period that brings her closer to her mother as well as her first love: the sea. Lisa’s struggle to find an exercise she can handle leads her to discovering the beauty of the Cape Town ocean spaces. The tidal pools in particular have become very meaningful to Lisa’s recovery, and she must now work to protect them from the harmful historical cleaning protocols that kill the marine life she has come to love. As communities begin to form, education on the topic of marine protection increases and Lisa is able to protect those spaces, the film concludes. 1st Prize – International Tourism Film Festival Africa 2020. Nomination – South African Film and Television Awards 2020. Best Ocean Film Award – Wavescape Film Festival 2018. Official Selections 2020: Kendal Mountain Film Festival, Waimea Ocean Film Festival, Ocean Film Tour, Gutsy Girls Adventure Film Tour. Official Selections 2019: Kleinkaap Short Film Festival, Lift-Off Online Film Festival, Encounters International Documentary Film Festival, London Eco Film Festival, Seoul International Film Festival.