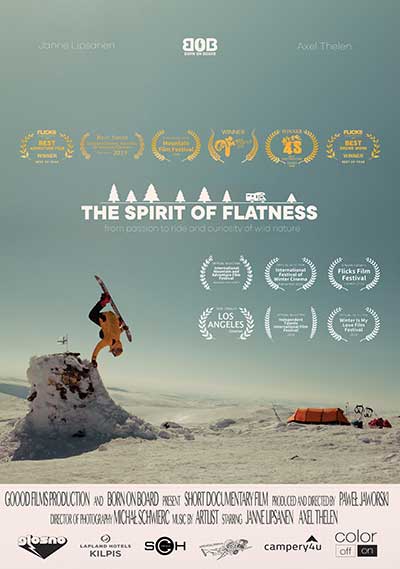 The Spirit Of Flatness

The Spirit Of Flatness is a documentary film about traveling through the country of Finland, snowboarding and figuring out how to practice this sport in such difficult (flat) geographical conditions, practically without any mountains. As you know Finland has some of the best snowboarders in the world, so we invited two interesting professional riders – Janne Lipsanen and Axel Thelen to our trip. They will tell and show us how snowboarding is done in Finland. In the film, we are driving 350km deep into the Arctic Circle and show the highest mountain top where probably no one has been seen on a snowboard before. Axel and Janne like most Finnish riders have never seen their own “mountains”, that’s why we’ve decided to do this trip. This story solves the mystery of such a big and great culture of snowboarding up there. Best International Short – International Festival of Winter Cinema 2019. Sierra Nevada Award – USA Mountain Film Festival 2019. Best Adventure Film Award & Best Drone Work Award – Flicks Film Festival London 2019. Best Documentary – 4s Film Festival Venice 2019. Winner Adventure Film – Riga TourFilm 2019. Semi-Finalist – LA CineFest 2018. Official Selection 2019: International Mountain and Adventure Film Festival. Official Selections 2018: WIML, Independent Talents International Film Festival.