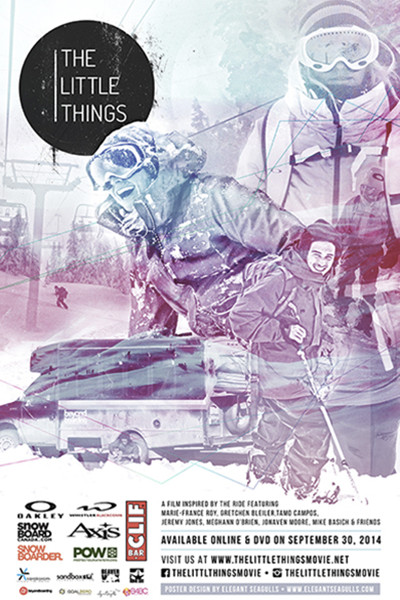 ‘The Little Things Movie’ is an environmental film featuring award-winning scientist David Suzuki alongside a cast of professional snowboarders making positive changes towards a sustainable environment. This film is the initiative of one of snowboarding’s most influential riders, Marie-France Roy, and directed by Darcy Turenne, with the goal of inspiring others towards sustainability. Featuring snowboarders that have adopted alternative lifestyles or gone off the beaten path in order to promote change in their own unique ways. The action follows from Marie-France Roy’s sustainable, hand-built cob house on Vancouver Island, to Jeremy Jones’ backcountry explorations and his work with POW (Protect Our Winters), David Suzuki’s influential speaking, to travels up the Northern BC Coast with First Nations Haida descendant and world-renowned cedar-bark weaver Meghann O’Brien, to Tamo Campos’ humanitarian efforts in the Sacred Headwaters, his work with Beyond Boarding, and his journey splitboarding around BC in a school bus that runs on veggie-oil. ‘Best Environmental Film’ Vancouver International Mountain Film Festival 2015.