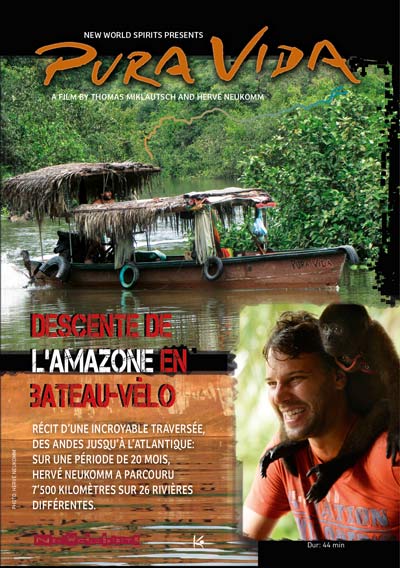 Story of an incredible journey, from the Andes to the Atlantic Ocean: over a period of 20 months, Hervé Neukomm covered 7,500 kilometers on 26 different rivers. In 2004, Hervé leaves Switzerland by bike to reach Tibet, but his journey takes another turn. While crossing seven deserts and arriving in Namibia, he longs for shade and water. He thus comes up with a crazy idea: to build a wooden boat with a thatched roof and use his bike as a motor by attaching propellers to it. After 40,000 kilometers on roads and dirt paths, he arrives in Tena in Ecuador and begins the most exciting adventure of his life. With his boat Pura Vida, he braves the forces of nature and shares unforgettable moments with the Indians, the animal kingdom – especially dolphins – but also with pirates and drug traffickers. Hervé Neukomm is the first person to “cycle”, exclusively with the strength of his legs, throughout the Amazon. His incentive was never to break a record but rather the desire to live as close to nature as possible and to discover some of its secrets, while favoring an environmentally friendly mode of transport. Winner – International Festival of Outdoor Films. Best Film – Expedition Camera Film Festival. Official Selections 2016: Innsbruck Nature Film Festival, International Mountain Film Festival Graz & Bovec Outdoor Film Festival. Official Selections 2017: Vancouver International Mountain Film Festival, Hory a Mesto Film Festival & International Water Festival.