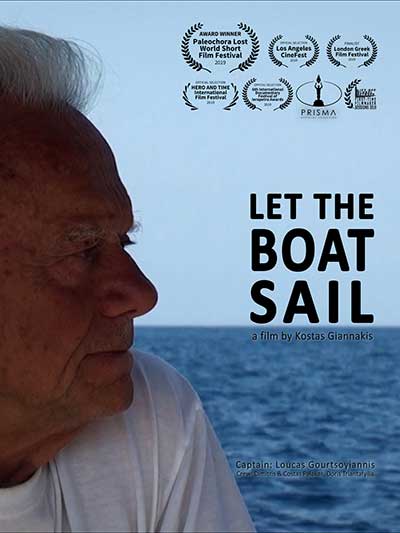 (Also available in 28 mins) Loucas is a 75-year-old yachtsman. He lives on the sea and his feet rarely step on land. He starts the tour of the Aegean Sea with a boat, only with the help of the wind, without using the engine. After a few days, two of the three crew members leave the ship. They can’t stand the prevailing conditions: no wind, strong winds and almost all the time permanent movement. He is practically left alone. His videographer can offer very little help. But that doesn’t hurt him as he solves any occurring problems in imaginative ways and doesn’t lose his optimism. He rejoices surprises, like a big flock of dolphins accompanying the boat. After several weeks of traveling, the film maker must leave because of force majeure. There must be a replacer. He finds one, but his character is totally opposed to Loucas. Nevertheless they have to coexist for several days. At times with conflicts, sometimes joys or frustrating still air as well as strong winds that make cooking and eating difficult. But there are also funny situations that make life a little easier on a small boat. Madness doesn’t climb on the mountains, it goes to the seas. Best Documentary – Palaiochora Lost World Film Festival 2019. Finalist – London Greek Film Festival 2019. Official Selections 2019: Hero and Time International Film Festival, International Documentary Festival of Ierapetra, Los Angeles CineFest, Rome Independent Prisma Awards, Lift-Off Global Network.