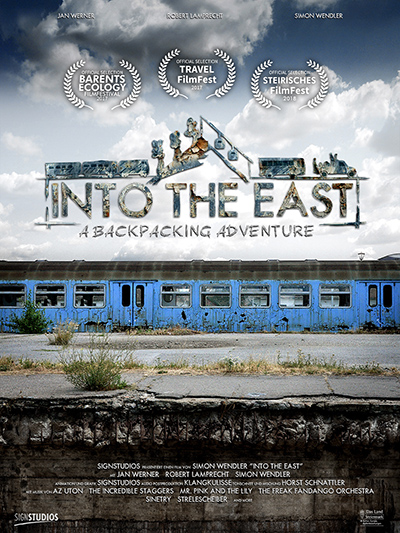 ‘Into the East – A Backpacking Adventure’. 4am, a deserted platform. Barking. Amid this scene sit three young people from Graz/Austria, two architects and an artist, so different in appearance as personality – their commonality: A backpacking trip to Eastern Europe. Starting from Graz they reach out to explore a fairly close, but foreign country. Romania, a relatively unknown, cliche-laden country waiting to be discovered. By train, hitchhiking and walking, they explore both: Romanian towns like Sibiu, Brashov or Sinaia and the capital Bucharest, but also natural pearls like the mud volcanoes of Berca or the natural park Bucegi – part of the Carpathian Mountains where not only hikers are to be found, but also a large population of bears, wolves and lynxes are indigenous. Of course, also Count Dracula is on the map and the trio visits the so-called “Dracula-castle” Bran. ‘Into the East’ is an entertaining documentary about a backpacking trip of three different friends travelling through Romania. Or: Everyday stories on a backpacking trip through Romania. Official Selections 2017: Travel FilmFest International Film Festival, Barents Ecology Film Festival & Steirisches Filmfest.