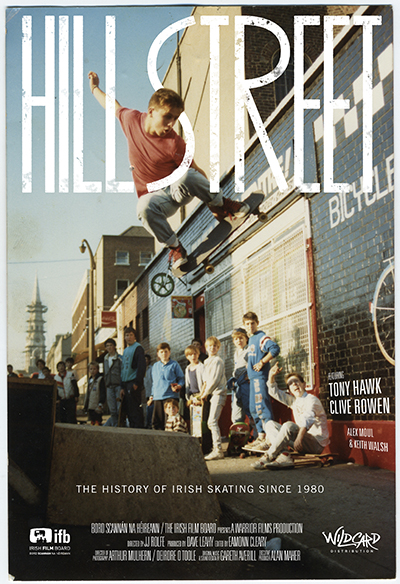 Hill Street – A Documentary about Skateboarding in Dublin from the late 1980′s. Hill Street looks at the evolution of skateboarding culture in Dublin since the late 1980s up until today. The initial driving force behind the scene was a proprietor of a unique skate shop in North Dublin inner city – ‘Clive’s of Hill Street’. From here, Clive Rowen single-handedly progressed the skate scene through the building of primitive ramps at the shop before graduating to a temporary skate park in the Top Hat Ballroom in Dún Laoghaire, County Dublin. Clive later managed to convince the Powell Peralta ‘Bones Brigade’ Team, including the legendary Tony Hawk, to visit the skate park for a now historic demo. The film comprises interviews with key players in both the Irish and global skate community and features rare, never-seen-before footage. A fascinating look at the early stages of the Irish skateboarding scene that is as much a wonderful introduction to a rich subculture as it is an exploration of a sport trying to legitimise itself against the backdrop of 80s Ireland.