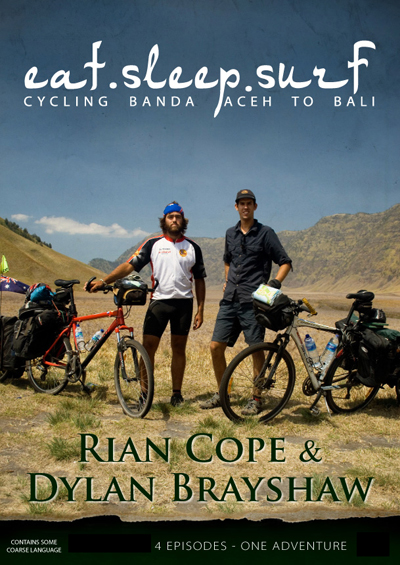 Rian and Dylan cycled and surfed across Indonesia in 2009. From Banda Aceh to Bali. This is their 4 part travel documentary. They explored the Islands of Sumatra, Similue, Nias, Asu, Mentawai, Java and Bali, finding many world class waves in the process. This documentary includes animated maps, 18 months of preparation before leaving and then action packed footage of day to day life on the bikes, meeting interesting people and exploring regions of the Indonesian Archipelago. From volcanoes in the Sumatran highlands to the awsome power of Lagundri Bay, Nias, you will get to see Indonesia through the eyes of two young Australian bodyboarders. Two young Australian guys with a passion for cycling and surfing who found themselves dreaming of adventure… One alcohol fueled night later Rian and Dylan found themselves planning the trip of a lifetime cycling and surfing their way across one of the most terrorism inflicted, natural disaster prone, surf rich and culturally awakening countries in the world – Indonesia! In 2009 they filmed and documented every part of their adventure. The highs and lows, the hills, the falls, the 46 tyre changes, the amazing people, places, surf and much more!