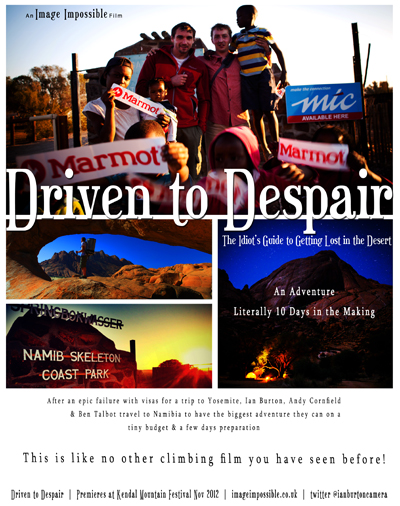 He thought he was going to shoot big wall climbing in Yosemite but after an ‘epic failure with visas’ Ian Burton travelled to Nambia to have the biggest adventure he and fellow adventurer Andy Cornfield can have with almost no money and no guide book at only a few days preparation. The best film about some of the worst climbing and map reading you’ll ever see. Driven to Despair is an adventure film taking in some of Namibia’s most breathtaking scenery, combining beautiful cinematography with a well timed narrative, it was one of the most accomplished films of the year at Kendal Mountain Festival 2012. The journey starts and ends at the Spitzkoppe, a huge friable, granite outcrop surrounded by the seemingly endless Kalahari which intern is flanked Skeleton coast. The trio of adventurers explore as best they can, totally on there own with little idea of whats round the next corner.