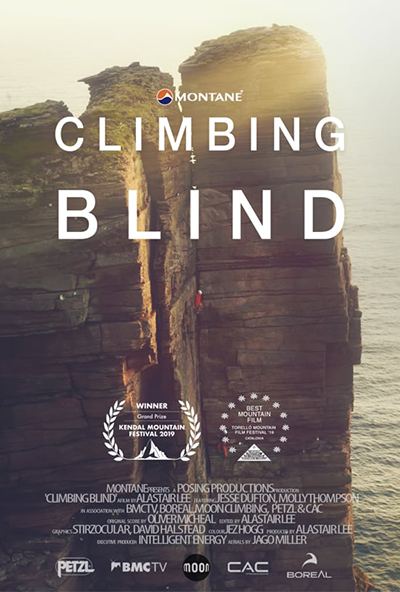 The multi-award-winning documentary covering the incredible story of the first blind lead of the Old Man of Hoy. Jesse Dufton was born with 20% central vision. At four years of age Jesse was diagnosed with Retinitis Pigmentosa: a rare genetic disease that breaks down the retinas’ cells. At aged 20 Jesse could no longer read, by the time he was 30 his vision was reduced to just light perception with around 1 or 2% field of view. As a life long climber, Jesse flies in the face of adversity training for world cup events and leading traditional rock climbs with his sight guide and fiancee Molly. As his sight degenerates his climbing continues to make remarkable progress. Despite his devastating condition Jesse only takes on bigger challenges by attempting to be the first blind person to make a ‘non-sight’ lead of the iconic Old Man of Hoy sea stack in Scotland. This engrossing documentary will make you laugh and cry as it delivers not just a truly gripping climbing story but a tale of human endeavor and attitude the world can take inspiration from. Includes cameo appearances from the likes of Neil Gresham, Leo Houlding, and Pete Whittaker. Grand Prize – Kendal Mountain Festival 2019. Best Mountain Sports Film – Torello Mountain Film Festival 2019. Best Climbing Film – Krakow Mountain Film Festival 2019. Best Climbing Film – Mendi Mountain Film Festival 2019.