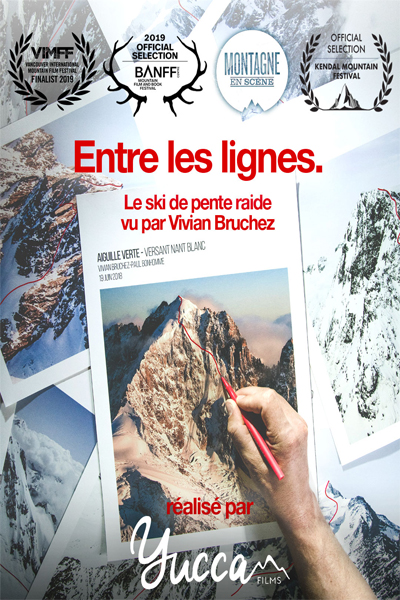 Between the Lines / Entre les Lignes

Extreme skier and high mountain guide, Vivian Bruchez has a prolific year in 2018, so we decided to produce a film retracing his winter, highlighted by “big achievements”. Between the Lines is more a documentary than a ski film, exposing the background story of steep skiing in the valley of Chamonix. An inspiring journey not only for insiders. Between the Lines portrays the unique vision of Vivian Bruchez who is always trying to find new lines in the Mont Blanc range. The film traces the beginning of a winter season with the ice tools and axes of Vivian and his friends such as Kilian Jornet, Jonathan Charlet, Mathéo Jacquemoud, Paul Bonhomme and Pierre Tardivel. Together they continue to explore the nooks and crannies of an already well explored mountain to find and open up new and very steep lines in the Mont Blanc massif. This is done in friendship with creativity and commitment. And that’s what we want to tell you in this movie! Finalist – Vancouver International Mountain Film Festival 2019. Official Selections 2019: BANFF, Les RDV de l’Aventure, Kendal Film Festival, Montagne en Scène. Official Selection 2018: High Five Festival.