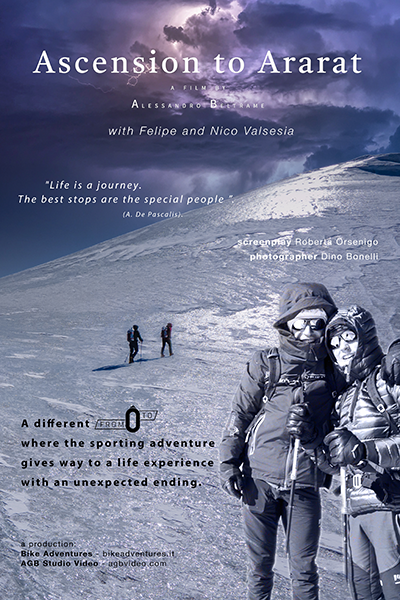 Ascension to Ararat retraces the 500-kilometer long ride of Novara ultra runner and cyclist Nico Valsesia from the Black Sea to Doğubeyazıt. Starting from the Turkish city with his son Felipe Valsesia, Nico tries to reach the top of Mount Ararat, the legendary mountain where Noah’s Ark is said to have come to a rest after the Great Flood. Nico and Felipe arrive in Turkey after a journey of over 4,000 kilometers through the heart of Central Europe, an experience they shared with video maker and director Alessandro Beltrame and photographer Dino Bonelli. But soon the expedition turns into a personal experience which involves all participants, especially with the arrival of a new protagonist who gives the Turkish adventure a strong turn, transforming certainties into questions and questions into new and unsettling answers. Ascension to Ararat tells a different story from the other “From 0 To” adventures done by Nico Valsesia, no longer based only on the achievement of an endurance record but on the experience of travel, where the real conquests are unexpected encounters which are able to show us different paths. Against the wind and against any convention! Ascension to Ararat is part of the “From 0 To” project started in 2013 by Nico Valsesia and includes non-stop climbing record attempts by combining cycling, racing and mountaineering, starting from the sea and reaching the peaks of the most important mountains in various continents.