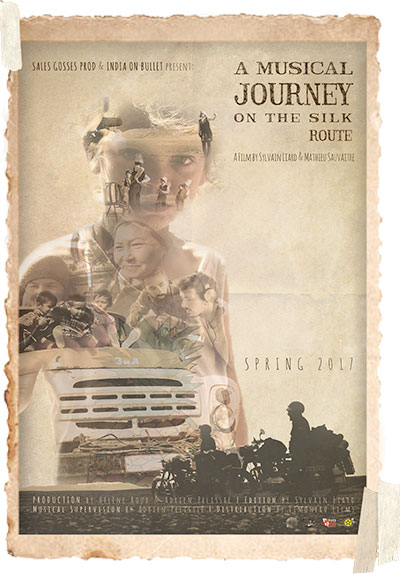 A Musical Journey on the Silk Route

(Also available in 52 mins version) In February 2016, Sylvain and Mathieu – two modern-day french explorers, musicians and filmmakers – decided to follow the famous Silk Route, which makes its way from India all the way back to their french homeland, riding old classic motorcycles mounted with their recording gear in tow. More than just a simple adventure, they are highlighting the social and cultural mission of meeting children from disadvantaged backgrounds along their way. Both are musicians from an early age and equipped with microphones and cameras in order to record the traditional way music is conveyed and learned across 17 countries. The pair of globetrotters will go through a wide variety of landscapes filled with colors and odours that will guide them along their way of 13,000 kilometers and 5 months, filmed with on board cameras without any extra cameramen. Of the temperamental kind, their 70’s Royal Enfield legendary bikes will be likely to cause them a number of surprises and unexpected events in the middle of nowhere, under extreme conditions. Not everything on this trip goes according to their rough plan and the travel route will change during this once-in-lifetime trip, full of incredible encounters and unforgettable adventures. Official Selections 2017: Alpes Aventure Motofestival, Le Grand Bivouac, Partir Autrement, Quais du Départ, Rencontres de l’Aventure, Retours du Monde.