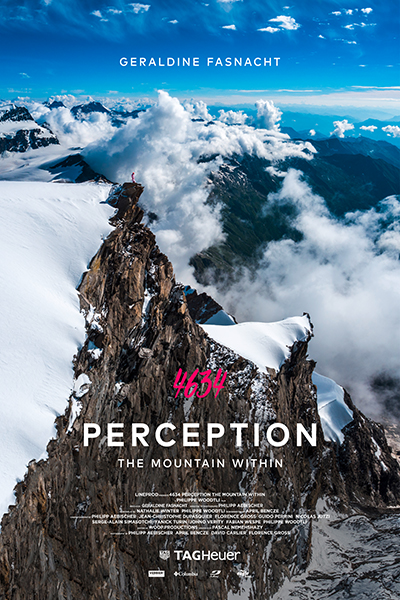 In the movie ’4634 Perception – The Mountain Within’ Géraldine makes us climb to 4634 meters of altitude at Monte Rosa. Up there, she explores the possibility of flying with her wings. Follow the latest technological developments of the bird woman that allows her today to hover faster and further. A new world opens up to her, beyond the limits she knew until then. Mont Rose, the highest mountain range of Switzerland with “Dufourspitze”, its highest peak at 4,634m in altitude, is the new dream of the bird woman. Snowboarding down the longest corridor of the Alps, the Marinelli, and flying in a wingsuit from the highest peak of the Mont Rose, a natural boundary between Switzerland and Italy. ’4634 Perception’ is a journey which takes the spectator on the tracks of this outstanding woman, the preparation, the ascent, the flight and the pleasure of gliding into infinity. In this 27-minute film and through her documentaries, Géraldine delivers her perception of the mountain and her philosophy. This is an inspiring and passionate movie. Award – Calcutta International Cult Film Festival 2017. Award – Mountain Film Festival 2017. Official Selections 2017: Nordic Adventure Film Festival, FIFAD, Mountain Film Festival & Cervino Cine Mountain Festival.