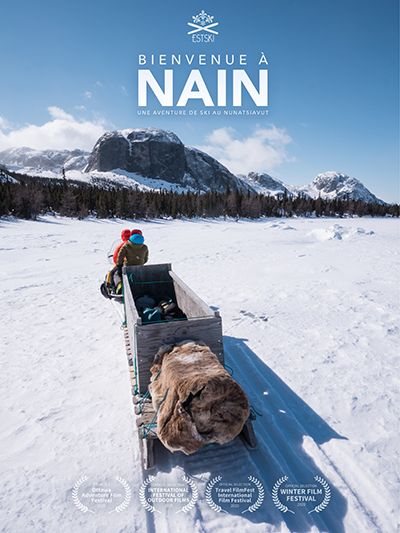 In March 2019, Estski realized a backcountry skiing expedition in Nunatsiavut, an Inuit-owned autonomous territory of the Province of Newfoundland and Labrador (Canada). More specifically, in two areas around the village of Nain in Labrador: Fraser Canyon and Kiglapait mountains. These mountains and canyons are very little visited in winter and several locals even mentioned that they had never seen anyone ski these corridors. From our information, it would be the first descents of these places in downhill skiing. The Fraser River is probably one of the most majestic canyons of the Northeast of North America. It starts from the east coast of Labrador to almost the border with Quebec. It is very rugged terrain and many ravines makes it a privileged terrain for extreme skiing. We plan to set up a self-sustaining base camp for a few days to explore some of these lines. The Kiglapait mountains, most of halfway between the village of Nain and the Torngat Mountains. It has the distinction of having very high peaks for the Northeast. The denivelation of these slopes is world class and often exceeds 600 meters. Our approach is part of a desire to immerse ourselves in the local Inuit culture in a perspective of inclusion and mutual respect. Eat as much local as possible, live with members of the community, work with local stakeholders, and absorb the views and interpretations of traditional Aboriginal knowledge keepers. Finalist – Ottawa Adventure Film Festival 2020. Official Selections 2020: International Festival of Outdoor Films, Travel FilmFest International Film Festival, Winter Film Festival.