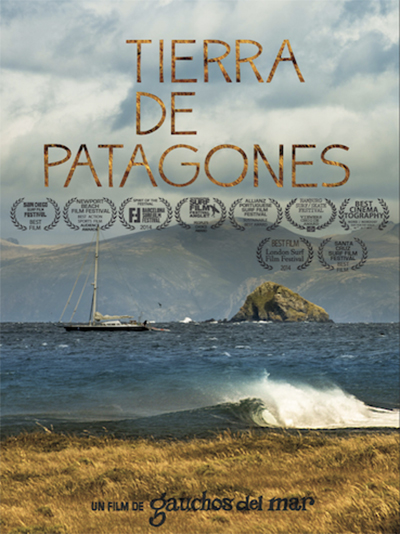 The Gauchos del Mar brothers set out on a 6 months journey to explore Patagonia. Joaquin and Julian Azulay pursue their goal of surfing empty point breaks at one of the southernmost areas of the world: Staten Island. They travel with a truck and live in a tent accompanied only by penguins and sea lions while fighting against the harsh weather conditions to reach Ushuaia. Along the way they show the endemic flora and fauna, meet the native people and share experiences with those who forge a life in this beautiful but bleak landscape before embarking on a sea voyage across the Straight of Le Maire, which is one of the most dangerous seas in the world to get to the uninhabited island. Combining beautiful cinematography, grand vistas and a soundtrack that captures the spirit of Patagonia this multi-award winning film will have you packing your bags and heading south for the winter. Award Winner of 9 International Film Festivals: ‘Best Film’ San Diego Surf Film Festival, London Surf Film Festival & Santa Cruz Surf Film Festival. ‘People´s Choice Award’ International Surf Film Festival Anglet, Hamburg Surf & Skate Festival and Newport Beach Film Festival. ‘Spirit of the Festival’ Barcelona Surf Film Festival. ‘Best Cinematography’ Nord Nordost Surf Film Festival Berlin. ‘Best Sustainable Film’ Allianz Portuguese Surf Film Festival.