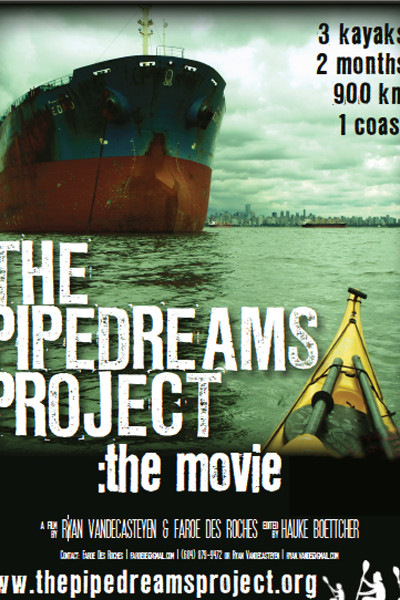 “In May 2010, Enbridge Inc. made an official application to build twined crude oil and condensate pipelines that would connect Alberta’s Tar Sands to Kitimat, BC, and for the first time bring crude oil super tankers to BC’s North Coast. In the fall of 2010 three kayakers paddled B.C.’s pristine coast to engage citizens about the risks posed by the Enbridge Northern Gateway Pipeline. Curtis, Ryan and Faroe kayaked 900 km in opposition to this controversial pipeline. Their journey leads them face to face with the complexity of the environmental assessment process, the difficulties local communities face in having their voices heard, and the growing resistance against the pipeline. Leaving the city behind for adventure and the exploration of the isolated and dangerous coast of British Columbia, they immerse themselves completely in one of the last truly wild places on Earth. The trio becomes deeply impacted by their experience, irreversibly entangled in the Pacific Northwest, and awakened to a world of power, politics and the question of democracy. “