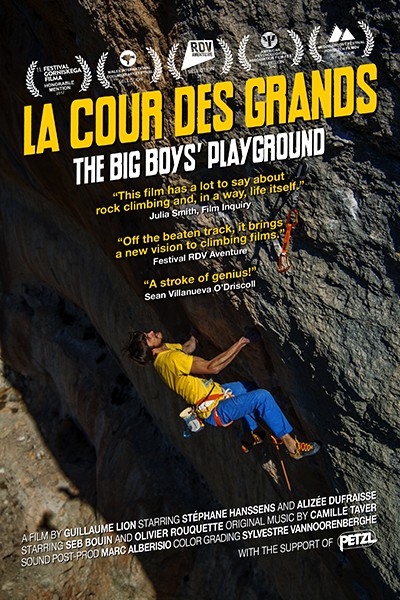 ‘The Big Boys’ Playground’ or ‘La Cour des Grands’ – Stéphane, a rock-climber, wants to make a name in the world of climbing. With his girlfriend Alizée, a renowned climber, he spends the winter in Siurana, Catalonia – the perfect place for tough climbing. ‘The Big Boys’ Playground’ is about the mindset of climbers. Sometimes the hardest part is simply accepting that one is able to succeed. Performance, more than a physical achievement, seems to be a state of mind. Through the sport of climbing the film reflects on universal topics such as the pursuit of excellence, achievement of goals and life as a couple … ‘The Big Boys’ Playground’ has the ambition to reach the general public, but at the same time it takes a critical look at already well-established climbing film industry.