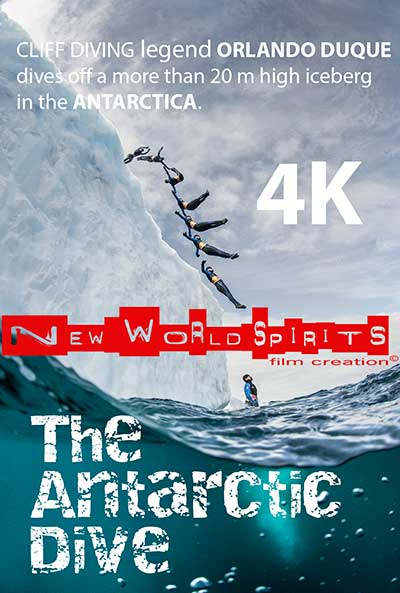 Colombian cliff diver and 13th time high diving world champion Orlando Duque joins the 4th Colombian scientific expedition to the Antarctica in 2018 to dive off a huge floating iceberg into the freezing waters of the Antarctic Sea. This documentary not only tells the story of his spectacular dive off an almost 25m high iceberg, it tells the story of several scientific expeditions, that are working on different projects on board of this ship concerning climate change and whale migration. Mari Luz Cañón Paez (Scientist of Ccostal Oceanography), Dr. Eduardo Santamaria (Coastal Oceanography), Diego Mojica (Glaciologist and advisor in Antarctic affairs) and part of the crew like Captain Joaquin Urrego or first women helicopter pilot of Colombia Lt. Elisabeth Santamaria give their insight and explain the core of their projects in interviews. A 20-meter-high iceberg was identified by Duque and a support team of 15, which included his wife Catalina, medical personnel and underwater divers. Armed with only a crampon, two ice axes and a 7mm thick neoprene suit, Duke made his way to the iceberg and submerged himself in waters that were below 1°C as the first human being in Antarctica.