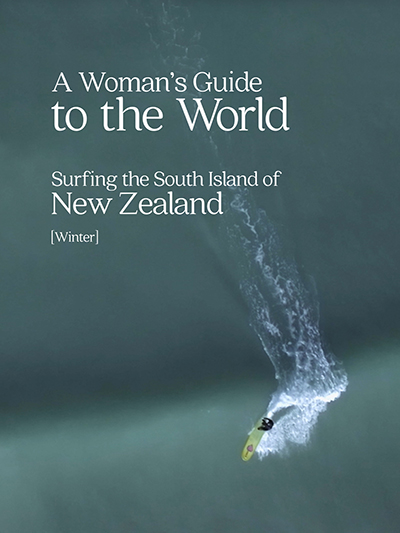 ‘Surfing the South Island of New Zealand – Winter’. Canadian filmmaker Apolla Echino was tired of seeing men get to have all the fun in adventure films and is on a one-woman mission to change that around. Her documentary series, A Woman’s Guide To The World, has taken her aboard a tall ship sailing to Antarctica and into the wildest corners of the Amazon jungle. But it’s the latest chapter, a wintertime surf trip across the stunning South Island of New Zealand that has attracted hundreds of thousands of viewers from across the globe. The film charts a solo surf road trip of the South Island. In the freezing New Zealand winter, Apolla is often the only surfer in the water – a fate that she says was both intimidating and exhilarating, “At times I wondered why on earth I was doing this.” Apolla only started surfing in her 30s. Despite donning a 5.5mm wetsuit, the cold was a constant on the trip, “I was surfing every day and sleeping withou electricity. Putting on the wet gear in the morning after a cold night was not pleasant.”