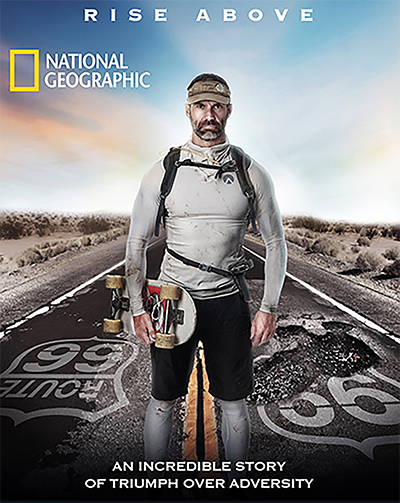 Rise Above is a powerful story about hope and a unique man who has found a way to rise above his own challenges and traumas and in the process inspire so many others to follow in his footsteps. In January 2015 Damien Rider and his prone paddleboard began a marathon journey that he hoped would take him to the shores of Sydney’s Bondi Beach – a distance of 800 kilometres. It was considered to be too great a challenge for even the most accomplished athletes – and Damien was a relative novice to the event. But Damien wasn’t like anyone else, he wasn’t chasing record glory and fame, he was out there for very personal reasons to help him conquer past demons. He endured a childhood of shocking abuse and the effects of this abuse stayed with him into his adult years. For 17 days Damien was out there alone and battled with the elements – the monster seas, violent storms and hungry sharks, yet somehow, against all odds, he made it to Bondi Beach. His journey captured media attention delivering his message that we can all rise above our challenges, no matter how insurmountable they may seem, and connecting with so many. Extreme endurance events would be the vehicle that would help take his message to the world and what Damien has accomplished with these events since the Bondi paddle is truly inspirational. Damien has skateboarded 3,796 kilometres across Route 66 in the United States, run and paddled non stop around the Island of Phuket, ridden a 1950’s Rickshaw bicycle over 260 kilometres and pushed a 2-tonne vehicle for over 40 kilometres on Australia’s Gold Coast. When he’s not pushing his body to the limit, Damien is inspiring others through media campaigns, public education programs, school support projects and community health classes. All of these challenges are captured in this heartwarming documentary.