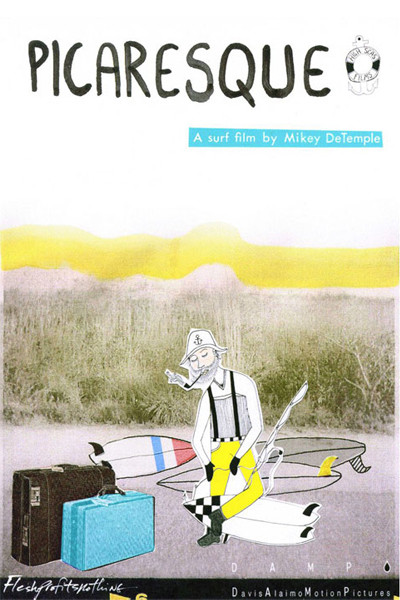 “From its inception, Picaresque was about showcasing longboarding in a new light; getting away from the preconceived notions and turning up the tempo. When in motion, longboarding is ultra fluid, yet relatively systematic. But when its done right, it’s also utterly dynamic. With an über-talented group of 25-and-unders (let for one), spells of innovation and sickening-balance led to a blending of traditional and progressive, resulting in a universal message about the sport: logging offers few limitations. The collaboration project between High Seas Films and Flesh Profits Nothing is about unveiling an unseen (and unappreciated) side of longboarding. Between the unique camera angles and editing, a new spin on “surf music,” and choice locations, Picaresque is a step into the new generation of surfing. Shot in Super 16mm film and High- Definition, the project took the crew around the globe, stopping in Australia, California, Florida, France, Mainland Mexico, New England, New York, and Costa Rica, presenting a range of backdrops, cultural interactions and wave faces. Starring: Harrison Roach, Christian Wach, Scotty Stopnik, Tommy Witt, Matty Chojnacki, Chris Christenson, Mikey DeTemple, Chad Doyle, Rob Kulisek, Alek Parker, and Bucky Barry.