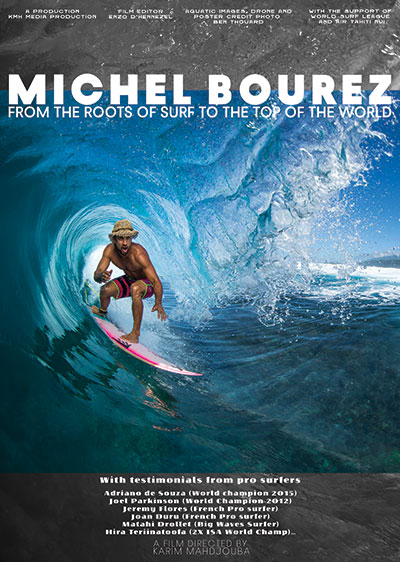 In 2018, The Red bull team pro surfer’s Michel Bourez enters a tenth season on the world surf tour. The documentary “Michel Bourez – From the Roots of Surf to the Top of the World”, retraces his exemplary and exceptional course. From his birth in Rurutu, through his first waves to Mataiea, this film highlights a life entirely devoted to surfing at the highest level. Through exclusive interviews, enriched with original documents relating his childhood, on approving why the Tahitian Michel Bourez is nicknamed the Spartan, how he reached a the world tour, how he lived his family life by spending eight months out of French Polynesia and how it returned to its best level after a serious accident at Teahupo’o in 2015. Produced in partnership with the World Surf League and Air Tahiti Nui, and including unprecedented and exceptional sequences, this documentary needed one year and a half work. Karim Mahdjouba, director of the film, followed Michel Bourez on trips to the French Polynesia islands, but also during the stages of the World Tour of surfing, from Fiji, to France, via Teahupo’o and Hawaii where he won in 2016 , one of the most coveted titles of the planet surf, the Pipe Master. After his victories in Australia and Brazil, this victory in Hawaii, confirms that the objective of the Spartan is realizable: to become a surf world champion. Official Selections 2018: FIFO, International Surf Film Festival, International Portugese Surf Film Festival.