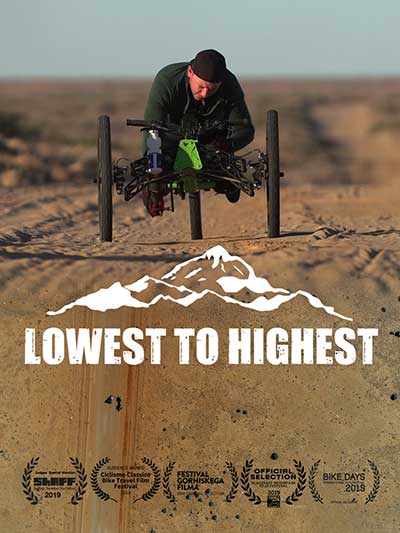 Through the boundless landscape of Australia, five friends attempt to be the first to cycle 2150km from Kati Thanda-Lake Eyre – a vast salt lake in the central desert 15 metres below sea level – to the snow capped summit of Mount Kosciuszko, the highest peak in Australia. What is a sensational effort for an able-bodied rider may well have been the ultimate challenge for Walter Van Praag with 35% lung function (due to Cystic Fibrosis), Daniel Kojta who is paraplegic and uses a hand-cycle, and Conrad Wansbrough who suffers from a debilitating spinal injury. What is a steady and manageable hill climb to the summit of Kosciuszko for some, was a monumental achievement for Paul Pritchard with half a working body (due to Hemiplegia). To get there, Paul rode a custom built tandem-recumbent-trike with Duncan Meerding, who has 5% remaining vision, although that didn’t stop him from pushing the trike along some of the steepest and roughest parts of the road. Accompanied by a romping great soundtrack, the riders travel through stunning and varied Australian landscapes, cruising past road critters and through clouds of dust kicked up by the onslaught of passing road trains, recuperating in riverside campsites and seeking bike repair shops along the way. The documentary captures the banter, the hardship & remarkable determination they have to complete the journey. Winner Spirit of Adventure (Bronze Award) & Judges Special Mention – Sheffield Adventure Film Festival 2019. Special Jury Award – New Zealand Mountain Film Festival 2019. Audience Award – Ciclismo Classico Bike Travel Film Festival 2018. Official Selections 2019: Adventure Travel Film Festival, Flagstaff Mountain Film Festival, Gorniskega Film Festival. Official Selection 2018: Bike Days International Film Festival.