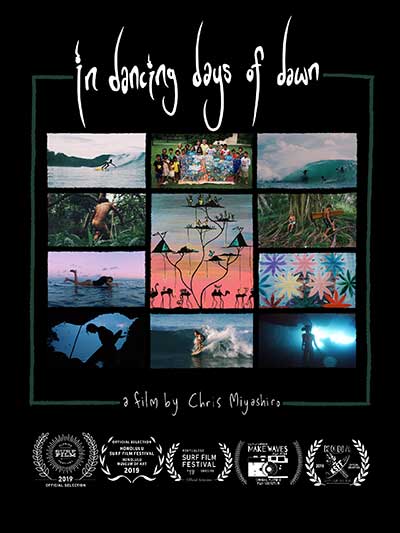 In Dancing Days of Dawn

In Dancing Days of Dawn is a debut feature surf documentary sure to leave you wanting for those early days of stoke. This story is a poetic look into the mind of Chris Miyashiro, the visionary behind the film. A wild journey to find purpose and meaning, told from the childlike perspective of an artist. Chris also known as “Mowgli” was born and raised in Hawaii. After growing up surfing, skating and doodling in his notebook, Mowgli decided to pursue something different than his peers. Thus birthed his passion for storytelling. In Dancing Days Of Dawn is the beginning of a lifelong creative outlet for the young islander. Official Selections 2019: Florida Surf Film Festival, Honolulu Surf Film Festival, Portuguese Surf Film Festival, Make Waves Film Fest, KSFF.