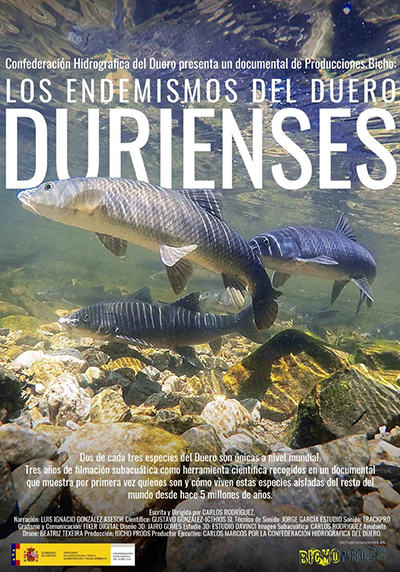 Dividing two biogeographic regions, the Duero River flows through a vast diversity of landscapes forming a borderline between northern Europe and the Mediterranean region. But besides being a point of transition between different landscapes, the Duero also hosts a surprisingly high level of biodiversity: recent scientific discoveries indicate that two out of three species of fish that inhabit the Duero are unique in the world, and are not found anywhere else on the planet. Three years of observation and underwater exploration in the Duero Basin to discover what makes this place one of the most unique evolutionary laboratories in the world. Mass migration as a reproductive strategy, adaptations to new sources of food, spectacular mating rituals. An intricate network of interspecific relations recorded in hundreds of hours of filming to serve as a tool for scientific study. An unprecedented endeavour to create a stunning documentary on one of the most surprising biological groups of fauna in the world. The DURIENSES: the endemic species of the Duero. Finalist – Eurasia International Film Festival 2019. Best Environmental Documentary – Alive Documentary Film Festival 2018. Official Selection 2019: Jahorina Film Festival. Official Selections 2018: Wildlife Conservation Film Festival, MovieScreenPro Film Festival, Quotes from the Earth – An Environmental Film Festival, XXIX Bienal Internacional de Cine Científico, International Underwater Film Festival.