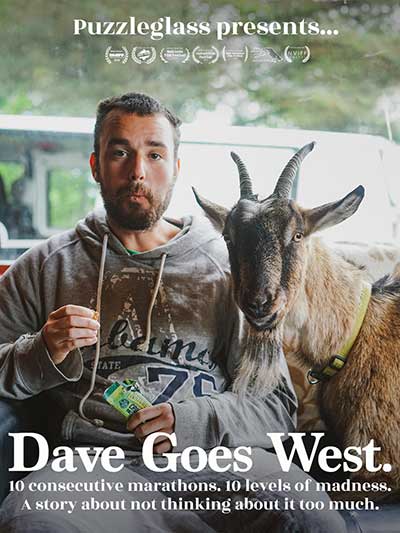 Dave Goes West is an experimental adventure / comedy documentary about a man from Derbyshire running 10 marathons in 10 days despite his own physical limitations and lack of proper training. The story of this film began one day in the pub. The film’s Director, Joe O’Connor, asked his old friend Dave if he thought he could run 10 marathons in 10 days. Dave thought about for about three seconds before replying ‘Let’s do this!’ So a few months later, they had assembled a team and head out to the West Coast of Ireland to attempt the impossible. Dave had asked almost everyone he knew if they wanted to run the marathons with him and one person said yes, an old university friend called Chris Jones. Chris is much more athletic than Dave, had ran many marathons in the past (usually gruelling mountain marathons) but still was uncertain about the next 10 days and the physical toll it would take on both of them. We had plotted 10 marathon (26.2 mile) routes out on a map of the west coast, starting in the town of Dingle and finishing on top of Ireland’s holy mountain, Croagh Patrick, and with hope in our hearts we set off into the unknown. The next 10 days were a testament to Dave’s stubbornness, dedication and his remarkable ability to not think about what he was doing. Official Selections 2019: SHAFF, High Peak, Webisode Film Festival, Irish Adventure Fim Festival, Cradle Mountain Fim Festival, NVIFF Awards. Official Selection 2018: Inshort Film Festival.