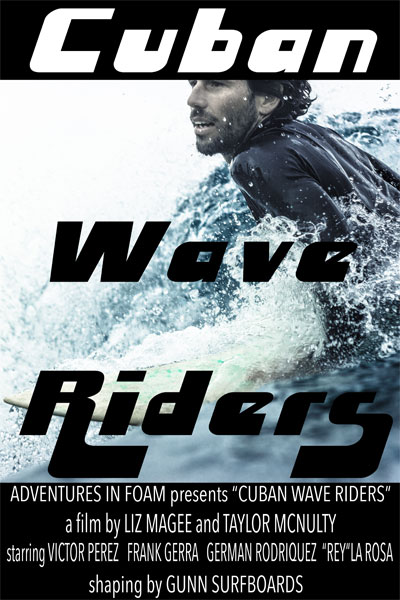 Cuba has almost three times as much coastline as California. Meanwhile, compared to the Golden State’s estimated one million surfers, Cuba’s surfer population hovers around 100 people. Since Fidel Castro did not support surfing in Cuba, the only way surfers could get boards were from travelers passing through Havana on their way to the Bahamas or the Dominican Republic. Surfing in Cuba has remained a very small subculture where the opportunity for professional sponsorship is non-existent. Cuban Surfers surf for the love of surfing. What they lack in equipment, however, they make up for with an abundance of pristine, undiscovered coastline and thousands of miles of empty, warm water surf. In the winter of 2017, two New York Based filmmakers, Taylor McNulty and Liz Magee, traveled down to Havana, Cuba for the first time. Liz had heard about a small local surf scene in the Miramar neighborhood of Havana and wanted to make a short video about surfing there. With zero connections and 2 research visas, the filmmakers eventually lucked out and met Victor Perez one day at a Havana beach. Victor told them about a series of little known surf breaks outside of the City, and that if they returned, they could join him and a few of the best local surfers for a surf trip around Cuba. The footage is historical for surfing in Cuba, with never before surfed waves ridden by Cuban Surfers Frank Guerra, Victor Perez, German Rodriquez, and Rey La Rosa. ‘Cuban Wave Riders’ is off the cuff, cinema-verite style filmmaking that draws inspiration from surf classics like ‘The Endless Summer’ and ‘Sipping Jet Streams’. The original soundtrack, photography, and artistic vision of the final film are all a result of this unique and spontaneous adventure. What was a simple idea became an excuse to travel to a new country, find inspiration, and share the joy of surfing with new friends. Official Selections 2018: Skate and Surf Film Festival, Honolulu Surf Film Festival, San Diego Surf Film Festival & International Ocean Film Festival.