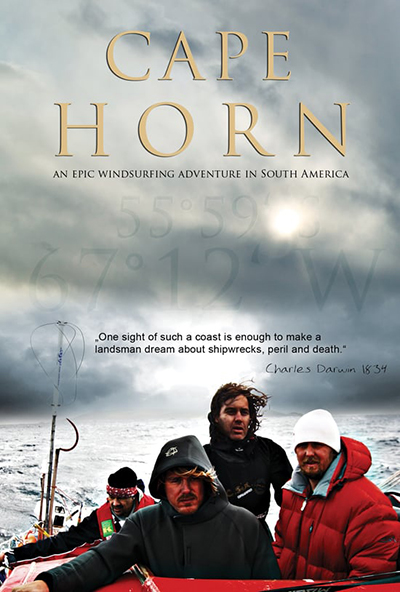 (Also available in 37 mins) In 2009 three windsurfers and a camera crew started out to sail around the infamous Cape Horn. They wanted to capture the myth of the Cape Horn and get a better understanding of the “old day” sailors and buccaneers, who surrounded the most southern tip of South America without engines or any kind of modern navigation systems. The myth of the Cape Horn and the knowledge that more than 10000 seamen lost their life’s here makes this adventure a thrilling challenge. Starting from the Pacific coast in Chile, southbound to the Patagonian lakes and eventually arriving at the end of the world in “Tierra del Fuego”. The story is told by an experienced fisherman from Punta Arenas, Chile. Juan Bautista Gutierrez is crossing the channels of Tierra del Fuego since many years with his typical Chilean wooden fishing boat, and he knows the currents, winds and all stories and legends like nobody else. He circumnavigated around the Cape several times and meets 3 windsurfers from Europe in his favorite local bar in Puerto Williams. While experiencing a typical crab fishing day together with Juan the guys learn a lot from his stories and advices about the Cape. Finally Tine Slabe from Slovenia, Ben Vandersteen from Holland and Thomas Miklautsch from Austria try to windsurf around the Cape Horn in extremely stormy conditions with huge waves and freezing winds gusting up to 70knots. Are they going to make it or will they be beaten by the notorious Cape once again, that caused so many victims already?